He was born a freak. With above-average intelligence, which soon realises that a body bent on destruction cannot live among others. 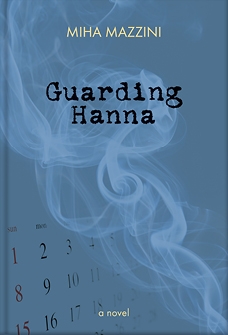 He was born a freak. With above-average intelligence, which soon realises that a body bent on destruction cannot live among others. The only person who can help him is a Mafia don, who has enough money to isolate the monster. But nothing comes free.

Village Voice, November 27, 2002
“In his new book, Guarding Hanna, his first to be translated into English, [Mazzini has] created a bestial protagonist striving toward a dubiously enlightened humanity….This bleakly comic work opens with its epilogue: ‘How hard I tried! And fucked everything up.’…The book’s last 50 pages race along in one huge chase scene, with bones crunched and blood everywhere, until a shocking reversal loaded with bitter, lancing ironies.” Read more

Readers on the Amazon.com, from November 2002
“and as I turned the last page I really felt that for a second the world had stopped turning and that nothing would be the same again. Read this book, suspend your prejudices and leave your emotions unguarded, it will be all the more rewarding.” Read more

Seattle Times, January 17, 2003
“a tonic mix of menace and comedy that keeps things hopping right up to the book’s twist ending. … Still, the novel provides a superb introduction to a vital new voice in Eastern European literature, and most of it reads beautifully, as Mazzini pits primal instinct against comforting domesticity and misanthropic gloom against the wells of generosity. ” Read more

Selfnoise, February, 2003
“This Is Weird. Very very weird. Funny, Black, totally unique. From-orphanage-to-organized-crime story/Beauty and the Beast story (gone terribly wrong)/ typical thriller… sortof. You have to see it to understand. I like it… I think. Can’t put it down.”

Booksense’s THE DAILY PICK, March 17, 2003
“A strange love story from one of Slovenia’s best-selling novelists.”

BThe Journal News, December 7, 2003
“Miha Mazzini’s “Guarding Hanna” (translated from the Slovenian) is the weird, elegant story of a conspicuously hairy, snout-nosed bodyguard predisposed to fits of violence and self-reflection. Much of the action takes place in the confines of Hanna’s Berlin apartment (she’s the witness our nameless deformed hero has been hired to protect). Amidst the taut chronicle of their week together — Hanna is chatty while the bodyguard remains taciturn; she brews herbal tea while he inadvertently kills intruders — certain truths arise. Suffering brings clarity. Salvation might descend at any moment. McDonald’s delivers (in Berlin). And finally: here’s one bodyguard who may not have been hired for the right reasons.” Read more